Promoting peace and co-prosperity among
China, Japan, and the Republic of Korea
Topic 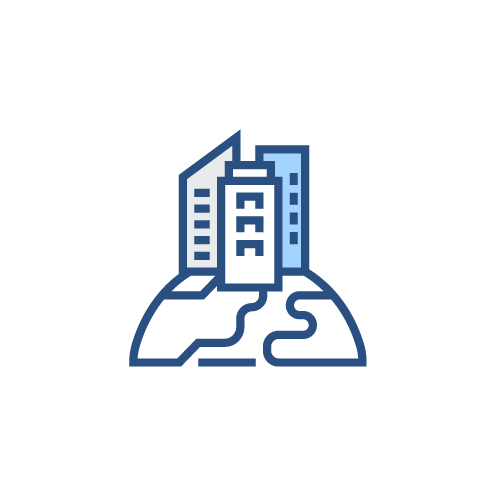 Local governments of the three countries have been running exchange programs in wide variety of areas including economy, environment, culture, sports, tourism, and youth. According to the research conducted by the Trilateral Cooperation Secretariat (TCS), total of 20 exchange groups among 55 CJK cities currently exist, and 5 major exchange mechanisms/events are in operation.
On the basis of sister/friendship cities agreement, local government exchange has expanded from including not only cooperation among local governments in various areas such as youth, culture, and sports, but also to including active participation in the private sector such as universities, museums, and libraries. Areas of exchange have also been deepened to include practical areas such as environment, tourism, and aging population. The Culture City of East Asia (CCEA) project, which marked its 7th anniversary in 2020, so far has 21 participating cities from the three countries. Efforts to improve the quality of the project by promoting exchange and solidarity among CCEAs within each country, as well as efforts to reinforce the network among CCEAs from different years, European Capitals of Culture, and ASEAN Capital Cities of Culture, are underway.
Each and every citizen of the three countries forms the backbone of trilateral cooperation and exchange; hence it is crucial that we promote exchange and mutual understanding at the level of local communities, the roots that sustain the lives of the citizens. The TCS will actively assist in promoting not only the local cooperation at the inter-governmental level, but also the exchanges at the private level.
Overview of Case Studies of
Trilateral Local City Exchange
There are 20 local government exchange groups introduced in our database,
which can be classified as follows :
1. Current Status of Each Country
The numbers of local governments running CJK exchange programs in each country are as follows.
(Since certain local governments participate in more than one exchange group, the sum of the numbers below does not match the total number of local governments participating in exchange programs.) 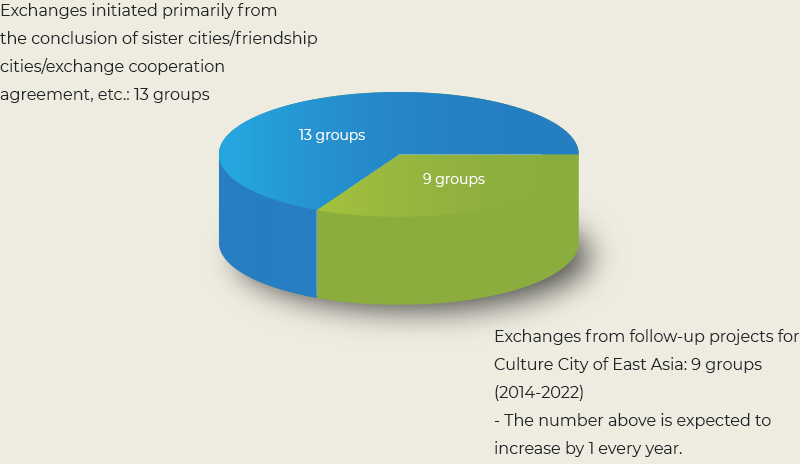 The sum of the numbers below does not match the actual sum of the number of trilateral city groups, as a single project can contain 2 areas or a single city group can be engaged in multiple areas. The number of exchanges with the purpose of promoting mutual understanding among the citizens of the three countries with cultural or sports programs is relatively bigger than that of exchanges promoting economic and environmental exchanges. 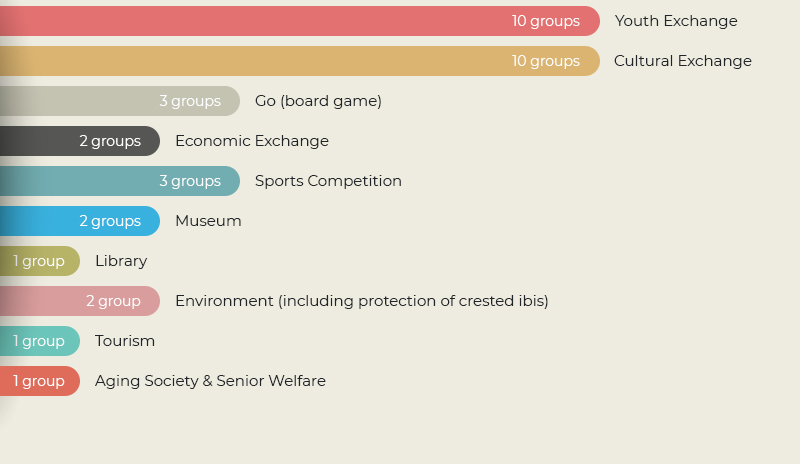 4. Classification of Exchanges by Generation

The sum of the numbers below does not match the actual sum of the number of trilateral city groups, since one group can be engaged in multiple programs. Most of the programs target adults, and youth exchange programs usually target middle school students and above. 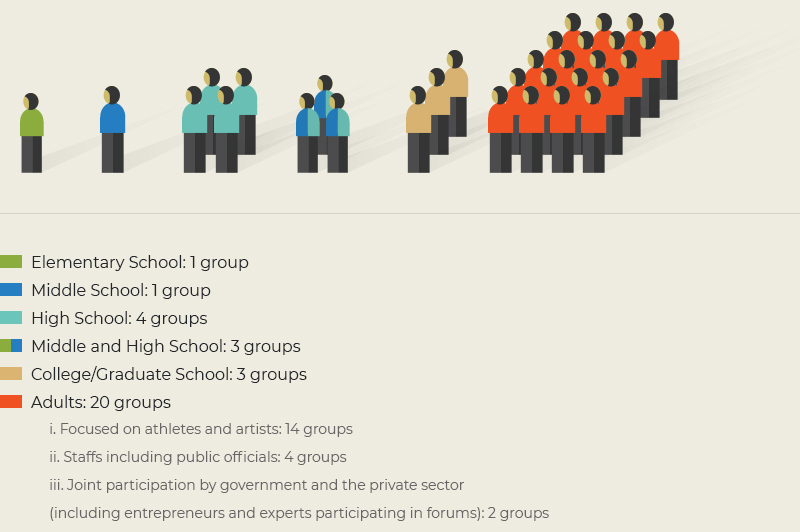 Half of the 20 trilateral city groups belong to the category “City/County Level”. 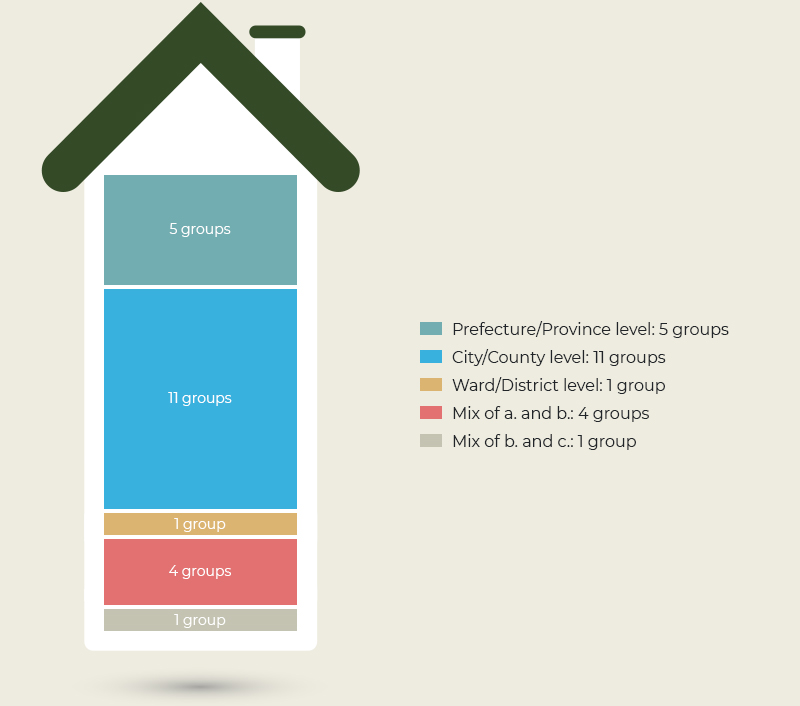 6. The Commencement Year of the Exchange

A number of CJK local exchanges began during late 1990s or after 2015. The first CJK Trilateral Summit was held in late 1990s. The main reason for increases after 2015 is because CCEA, which began relatively recently, increases one group every year. Many CCEA continue exchanges until today.

7. Venue of Exchange: Rotational or Fixed 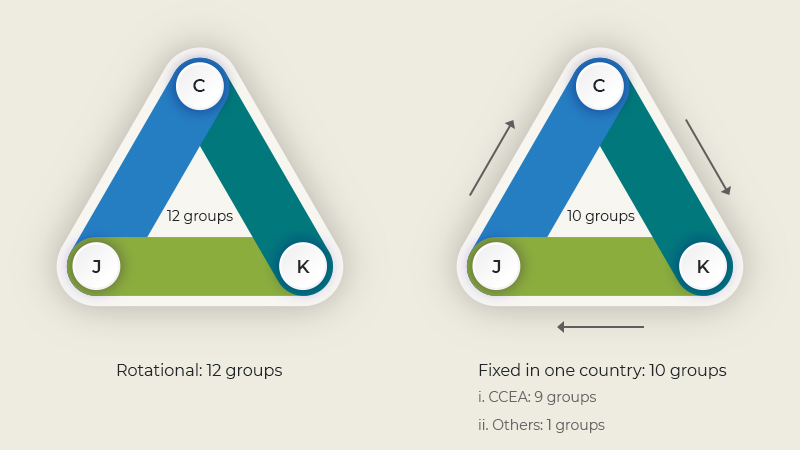 Our database may not include all of the existing cases. Please contact us at tler@tcs-asia.org, if there are groups or cases of China-Japan-ROK local cities exchange not introduced on this website.

Online Symposium “Urban Regeneration in China, Japan and the...